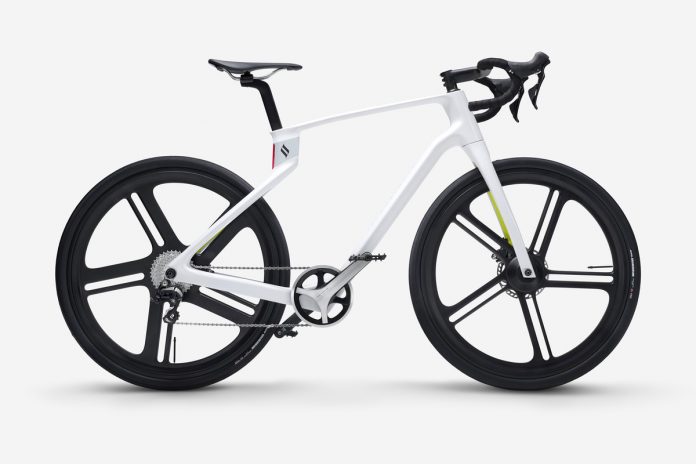 Each frame is 3D-printed in a single pass of continuous carbon fibre thermoplastic composite.

The company said that “unlike other carbon fibre bikes whose frames are glued and bolted together with numerous parts and fabricated from previous-generation thermoset composite materials, the Superstrata frame is constructed without joints or glue for seamless strength”.

The Superstrata Ion is a $4,000 bike. But it’s not just any $4,000 bike (I likely wouldn’t be writing about it if it were). In addition to looking quite slick, the unibody bike is 3D printed from a single piece of carbon fiber material. The approach makes it possible for the company to essentially deliver a custom bike to the rider’s body. And despite its seemingly hefty price tag, the Ion is still cheaper than most traditionally constructed carbon fiber bikes, which can cost as much as $12,000.

There are two models being offered under the Superstrata brand. There’s the aforementioned electric Ion and the Terra, a $2,800 standard bike. Neither are quite a reality yet. Both are being offered up as pre-orders on Indiegogo (the campaign has already funded 5x its initial $100,000 goal) via Alabaster/Misfit founder Sonny Vu — a familiar name to anyone who has been following the consumer electronics space over the last several years.

The usage of cloud analytics at the Olympics is transforming the way sports technology is utilized.

LaKisha C. Brooks, M.Sc., M.Ed, CDP, Director of Learning and Development, Brooks Enterprise and Consultants - September 24, 2021
A lack of soft skills is one of the biggest hurdles to hiring qualified people and to offering career enhancement opportunities. Soft skills include...

Ben Eilenberg, Generalist Teacher and Microsoft Innovative Educator Expert, Silverton Primary School - September 24, 2021
Over a period, I have been looking at ways to implement a wide range of Robotics and programming into the wider curriculum. When I...

Weston Morris, Director of Global Strategy, Unisys - September 24, 2021
4 Steps to an Effective Modern Workplace We are all talking about a “hybrid office” as if it were a new idea. The reality is,...

Employees at ExpressVPN are concerned with the company’s top position being held by an...

A grain handler in Minnesota has been the subject of a ransomware attack.

Sandra Nath, Senior Contributor - September 24, 2021
Crystal Valley Cooperative, a Minnesota agricultural organization, said it had been the subject of a ransomware attack in recent days, making it the second...

Contents that break the rules will be removed from Amazon’s cloud service.

How is IoT impacting business landscapes?