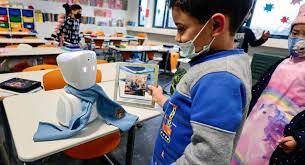 Joshua Martinangeli, 7, is unable to attend school due to illness. However, the German student may still communicate with his teacher and classmates via an avatar robot that sits in his place in class and blinks when he has something to say.

“During the lecture, the students converse with him, laugh with him, and even chitchat with him. Joshi is also capable of doing so “In an interview with Reuters, Ute Winterberg, headmistress of the Pusteblume-Grundschule in Berlin, said.

Joshua is unable to attend lessons due to a tube in his neck that he wears due to a severe lung illness, according to his mother, Simone Martinangeli. The project is a private initiative funded by the Berlin district of Marzahn-municipal Hellersdorf’s government.

The project is a private initiative paid for by the local council in the Berlin district Marzahn-Hellersdorf.

“We are the only district in Berlin that has bought four avatars for its schools. The impetus was COVID-19, but I think this will be the future well beyond the pandemic,” said district education councillor Torsten Kuehne.

“It does happen from time to time, for various reasons, that a child cannot go to class in person. Then, the avatar can give that child a chance to remain part of the school community,” Kuehne said.

As Russian elections approach, Google and Apple have removed Navalny’s app from their stores.

Fleet Space: Step into the Space with IoT

Why Must Enterprise Data Management Be a Strategic Capability for Life Sciences?